What is Bitcoin and how to benefit from trading it. 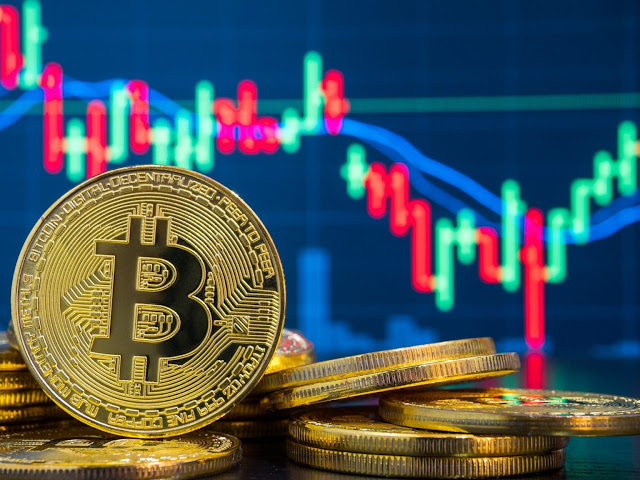 Bitcoin is a one-to-one (virtual) digital currency, created by “Satoshi Nakamoto,” who worked on this project alone and released the token to the public in 2009. It disappeared shortly after the virtual currency was created, and what remains  After him is this infamous quote:

Bitcoin is traded in a one-for-one network, with all transactions recorded in a public ledger called the block chain.  If you send 1 bitcoin from your bitcoin address (or wallet) to your friend Ahmed, the bitcoin network records the transaction in the public record, this means that you have no possession of bitcoin.  The coin has moved from your Bitcoin wallet to Ahmed's wallet.

In November 2008, an article titled "Bitcoin: One-for-One Electronic Cash System" was published to an encrypted mailing list under the name Satoshi Nakamoto.  This article has discussed ways to use a network one-for-one "System for electronic transactions without relying on trust".  In January 2009, the Bitcoin network came into existence with the release of the first open source Bitcoin client and the issuance of the first Bitcoin, and Satoshi Nakamoto was the first ever to mine Bitcoin.

In the early days, Mr. Nakamoto was valued at 1 million bitcoins, before disappearing from any bitcoin engagement.

The value of the first Bitcoin transaction was discussed by some people in the 'Bitcointalk' forums and the transaction was observed that 10,000 Bitcoins were used to buy two pizzas indirectly.

The only security bug that has been found and exploited in the entire history of Bitcoin, on August 6, 2010;  More than 184 billion bitcoins were created in a security breach deal.  Within hours, the deal was spotted and erased.

How is bitcoin extracted?

Bitcoin mining is the process by which bitcoins are released into circulation.  This involves solving a computationally difficult puzzle to discover a new block, which is added to the block chain, and in return receives a reward in the form of a few bitcoins.  The more bitcoins that are generated, the more difficult the bitcoin mining process - that's all, the more powerful the computers involved in the mining process.  In the past, a normal desktop computer was sufficient for Bitcoin mining, but now to keep up with the level of difficulty, more advanced and faster computers and processors must be used.

How does the bitcoin exchange system work?

The simple answer is: Just like exchanging ordinary physical currencies.  Basically you are buying one currency against another on online exchanges like Mt.  Gox acts as brokers for currency transactions, and they convert the capital from bitcoin to US dollars to other national currencies, and back to dollars or bitcoins.  This is how you can earn money.  By exploiting the ever-changing values ​​of different currencies, traders can benefit from moving money around these markets, in a process known as arbitrage.  But they can lose it just as easily.

How to start trading bitcoin

Bitcoin CFDs are the magic that allows you to trade Bitcoin without using Bitcoin.  It was originally created for the purpose of gaining exposure to Bitcoin without actually having to own it.

(CFD) stands for Contracts for Difference and is a contract between a trader (trader) and a broker.  These contracts announce that the difference between the trader's entry price in the contract and the exit price of the contract is either the trader's profit or loss, essentially simulating as if it was an actual financial instrument (ie Bitcoin) and was actually owned by the trader.

Trade CFDs on Bitcoin with iFOREX:

When you trade financial assets, there is always a concern about how to verify or make your trades.  Trading Bitcoin with iFOREX removes this concern with its easy-to-use trading platform.  It is even more efficient if you do more than just bitcoin trading, because then you can manage all your trades in one place.  For example, you can trade bitcoins while investing in currencies, indices, stocks or commodity CFDs simultaneously, and manage multiple trades using advanced trading tools.

To buy one whole coin, and to buy one bitcoin you have to pay the full amount.  When you trade bitcoin through iFOREX, however, you can use leverage.  This means that you only need to put a small part of the full value of the transaction, and you will not need the whole amount like actually trading Bitcoin on a public exchange.  Therefore, you can trade more bitcoins (as CFDs) than on an exchange.

Increase the cost of trading

Trading Bitcoin CFDs will add a spread or commission, but this is the same as every currency exchange, whether it is online or physically at exchange offices.

The Bitcoin spread may be slightly higher as well as other fees such as those charged with overnight financing.  All of these can accumulate over time, making trading more expensive, although it is only by a small margin.

Absence of the option to choose the Bitcoin exchange

When you trade bitcoin live and physically, you can choose which exchange you want to use.  There are hundreds of bitcoin exchanges all over the world, their values ​​varying slightly from one to the other.  Trade with a CFD broker like iFOREX, you only have to accept the quoted price, but you will enjoy the stability and confidence we offer as well.

Before we go any further, a cautionary note: Bitcoin prices are extremely volatile.  Prices have risen and fallen dramatically within a month - and even within a week or a day.

Trading Bitcoin with iFOREX, allows you to maximize your initial deposit by up to 10 times, allowing you to get more exposure to the market but not risking more than what is in your account.

Traders who buy and hold have a longer view, often referred to as “stickers” in the bitcoin community.  They look at the price of Bitcoin in terms of monthly, weekly and sometimes daily charts.  They expect Bitcoin to become very valuable in the future.

There are some justifications for this view, due to Bitcoin Cash's superior utility, limited supply and inherent advantages over regular currencies.  Adherents tend to base their actions more on fundamental analysis than on technical analysis, i.e., adherents act on their assessment of the economic potential of Bitcoin rather than chart patterns and the like.

Sticklers are sensitive to daily price fluctuations.  Some adherents are not even gradual from extreme price movements, especially those who have seen several bubbles throughout Bitcoin's history.  Sticklers tend to see price crashes as an opportunity to get more coins at a lower price.  They may profit if they believe the price has reached an unsustainable peak although it is unlikely that they will liquidate their positions completely.

A swing trader typically holds a position for several days to several months.  Their strategy, however, is to trade significant price movements between two extreme points.  When the price does not follow a strong uptrend (often called a “bullet”) or a strong downtrend (often called a “bearish”), it tends to range between a high and a low.  These are the levels at which buyers or sellers reliably enter the market in terms of volume, resulting in a price reversal.

When the bitcoin price reaches a potential reversal level, swing traders will bet on a price reversal, especially when indicators confirm the possibility of a change in trend.  If the price continues instead of reversing, this is a clear signal to exit the trade with minimal loss.

Swing trading is a strategy that gets along very well with CFDs.  The time frame is a good fit and larger price movements will adequately compensate for the spread and cost.  Also note that a Take Profit Limit and a Stop Loss Limit, available when buying or selling through iFOREX, can be used to obtain significant leverage when engaging in such trades.

Ranging chart of the bitcoin market.  Small swings can be traded inside big swings as well.

As they say, "This trend is your friend, until it ends."  Depending on the trend, traders aim for a long entry to the upside or to the downside and ride the wave until it is exhausted.  Unlike swing traders, trend traders often do not have a predetermined target.  This is especially true when the price hits new highs, as bitcoin did from early to late November of 2013, when it moved from $250 to more than $1,000 for every single bitcoin.

Determining the trend in the market is an art form, because the formation of trends is unclear in the early stages.  One of the clear indications of the emerging trend is that the price is constantly achieving maximum highs or falling to the lowest level.  The breach of some important levels previously confirms this trend.  The trends are gaining momentum because market participants are 'herd'.  If this trend is particularly strong, it is quickly noticed by the financial media, which directs more people to participate in the trend.

The best trend traders are the ones who get in as quickly as possible and get out before the trend reverses.  Trying to pick tops and bottoms is a foolish task but - it is better to wait for trend confirmation by momentum indicators, and make a profit sooner rather than later.

Like swing trading, trend trading fits well with CFDs.  Although there are waves/trends on all time frames, when trading CFDs it is better to look for big moves on the longer time frames;  Multiple days, weekly or monthly.

Daily chart for about 3 months, showing a new upward trend

Trading during the day

Day traders only hold trades for as long as they are "on duty" - usually 12 to 16 hours but sometimes longer.  On the Bitcoin trading charts, you will often see day traders complaining about lack of sleep because they are looking after a particular trade that they cannot afford to close.  Traders may trade intraday volatility and/or trends and some of them will engage in scalping (covered below).

Intraday traders are likely to follow one hour or hourly charts, sometimes referring to higher time frames.  This trading style is best for those who want to make bitcoin trading their main job.  Intraday traders get along well with Contracts for Difference (CFDs), except in times of low volatility when price movements are minimal.

Scalping traders try to profit from minute-by-minute moves, and often use the imbalances in the order book to take many small profits.  They tend to use charts of 5 minutes or less.  This method is not entirely suitable for Contracts for Difference (CFDs) due to the spread on them, which makes trading fees higher than the expected return.